Conspiracy! The Show – “The Death of America’s Worst President”

We probably don’t even need to tell you, but this week mark’s the 94th anniversary of the death of the worst American President of all-time (so far). Of course, we’re referring to Warren G. Harding. His brief, scandal-laden tenure in the White House and untimely death are the subjects of this week’s episode of Conspiracy! The Show. You can listen to it right damn here:

The Death of the Worst American President

As we just mentioned, Warren G. Harding is the topic of discussion. For those unfamiliar, Harding is routinely “credited” with being the very worst president in American history. That’s saying a whole lot when you take into account that he’s not even one of the two we’ve impeached. Granted, that’s almost entirely because he died before we had the chance, but still. 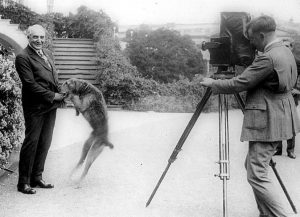 Did this good boy kill him with loves???

Speaking of that, Harding was so corrupt and so inept, there are plenty of people who think someone from his inner circle maybe killed him. We’re talking about a man with a history of blood pressure issues who eventually dies of a stroke. A completely logical explanation, but the timing and circumstances around his death are such that some still believe he was killed.

Do Adam and Connor believe it? Listen to the episode and find out!

Do you want to hear Conspiracy! The Show every single damn week? You’ll be able to do that soon, and all you have to do is subscribe to Unpops on Patreon. In the meantime, subscribe to free bi-weekly episode on iTunes. You can also check out video version of this and a bunch of our other shows on our YouTube page. Oh, and maybe consider throwing us a follow on Instagram, Twitter, and Facebook.