Welcome to the start of your week! How about kicking things off by listening to the latest episode of The Monday Show? We’ve got that for you right here:

Even better, we’ve assembled the notes from this week’s recording so you don’t have to follow along blindly like some kind of uninformed boob. No, you’ll have information to guide you along the way. Lots of information. This information…

Why Isn’t the Wonder Woman Movie Being Promoted More?

For the first time in history, one of the most iconic comic book heroes of all-time is getting the huge Hollywood blockbuster movie treatment. The problem is, there’s a good chance you have no idea it’s happening. DC Comics’ Wonder Woman movie comes out less than a month from now and, as this Uproxx article and several other sources have pointed out, almost no one is talking about it, including the studio that’s responsible for promoting it. 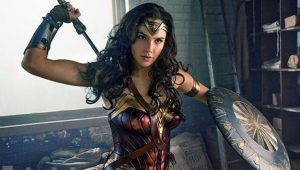 Nothing to see here!

Well, in the studio’s defense, they did cook up a sweet cross promotion with Think Thin cereal. Because even Wonder Woman has to make some sacrifices to keep it tight, ladies. Beyond that, no one is talking much about what deserves to be one of the most heavily promoted movies of the summer.

Heather and Mike Martin, known on YouTube as MommyOFive and DaddyOFive, respectively, have apparently lost custody of their children. You know, the children they emotionally abused in their videos. Videos that were watched week in and week out by 750,000 subscribers. Those subscribers should be ashamed. It took an angry video from another YouTube personality for someone to finally alert the authorities. DaddyOFive has since deleted almost all of the videos from the family’s page.

Pepe the Frog Is Dead

Hey, have you heard the good news? Pepe the Frog, the perfectly innocent comic book character turned evil icon of the alt-right, is dead. Matt Furie, who created the character back in 2006, decided to end it all in a comic released on Free Comic Book Day. Here’s a quote:

“It’s completely insane that Pepe has been labeled a symbol of hate, and that racists and anti-Semites are using a once peaceful frog-dude from my comic book as an icon of hate. It’s a nightmare, and the only thing I can do is see this as an opportunity to speak out against hate… I understand that it’s out of my control, but in the end, Pepe is whatever you say he is, and I, the creator, say that Pepe is love.”

Rest in peace, Pepe. We suppose.

To hear weekly episodes of The Monday Show and all of our other shows, subscribe on our Patreon page. Also, you might consider giving this show some good ratings and reviews on iTunes.