Is the Albuquerque PD Still Crazy?

Adam welcomes Aaron Pita and John Fahy from the Profiles In Eccentricity podcast to check back in with the most “eccentric” (meaning violent) police force in the United States to see if anything’s changed since the Department of Justice asked the Albuquerque PD to stop killing people back in 2014. Listen to the episode below…

…or better yet, subscribe on iTunes! And uh…maybe leave us a nice rating while you’re there! Leave a place nicer than you found it, like a good Boy Scout!

Wow, y’all, this is gonna get ugly. In 2005, officers Richard Smith and Michael King were killed in the line of duty by a man they were picking up for a mental health evaluation. In the wake of it, then-mayoral-candidate Martin Chavez–not at all exploiting a tragedy for political gain–promised to increase officer staffing from 1,000 to 1,100. But when they couldn’t find enough people to fill the positions, they lowered the hiring standards, including waiving background and mental health checks for “lateral hires” meaning cops hired from other departments. This was as bad an idea as it sounds like it would be.

One of those officers, Sean Wallace, shot an unarmed man named Alan Gomez in 2011. Wallace claimed he saw a gun. It was his third shooting in seven years, the second in which he’d killed someone. In 2014 another of those officers, Keith Sandy, shot and killed a 38 year-old houseless schizophrenic man named James Boyd, who was armed only with two small knives. By the time of Boyd’s death, the U.S. Department of Justice had completed and was about to release a damning report on the department which they had begun investigating for excessive force in 2012.

Among the investigation’s findings:

And this is just where we left off the last time we covered this on the podcast.

Since then, no cops were charged or disciplined in any way for any of these shootings, including Keith Sandy (who was initially allowed to retire) until a murder investigation was opened against him in 2015. The department responded to the DOJ report by slamming its doors closed; the District Attorney and her staff were repeatedly kept out of meetings and blocked from accessing files. When DA Kari Brandenburg left her position at the beginning of this year, she released a letter to the DOJ damning the Albuquerque PD. The letter included such gems as “their performance can accurately be characterized as grossly noncompliant,” “APD has almost no appetite for correcting behavior that violates existing policy,” and my personal favorite, “Frankly, if any other group of individuals were acting the way APD has allegedly been acting, some of us in law enforcement might refer to them as a continuing criminal enterprise and/or engaged in the act of racketeering. I appreciate how bold a statement that is.”

There’s also been a pattern since the DOJ report of the APD mysteriously losing video evidence against them, including from Boyd’s murder (Sandy’s lapel camera “stopped working”). Another prominent case was the murder of Mary Hawkes, who was reportedly shot and killed by officer Jeremy Dear after a chase when she pulled a gun on him, but his lapel camera also mysteriously stopped working and the testimony of officer Tanner Tixier who backed him up misaligned with footage from his lapel camera, which showed he was 30 feet away during the time of the shooting. Also, the gun found on Mary had no fingerprints, blood or DNA of any sort on it.

Since then, we’ve also seen a weird report from the Sheriff’s department. The Bernalillo Sheriff’s Department deputies have shot nine people IN THE LAST FOUR MONTHS. One deputy, Charles Coggins, shot two people in 22 days, killing one of them. There’s even this photo of a deputy pointing a gun out of a moving vehicle at a motorcyclist, claiming later that he was “in fear of an immediate and impending battery.” 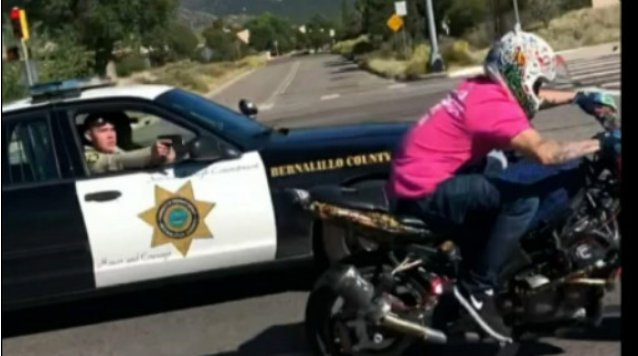 And in the wake of this, Sheriff Manuel Gonzalez has refused to introduce body cams, claiming it (somehow?) “gives a lopsided, one-sided story, which I think is a disservice to the whole community.”

For more of this absolute fucking insanity, listen to the episode!

For more Unpopular Opinion, subscribe to all of our podcasts for just $5/month on Patreon. You should also check out our YouTube page to see us do video stuff a little now and a lot more in the future.