Sport Horse: A Podcast About Sports 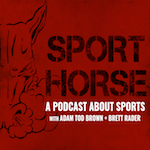 Hosted by Adam Tod Brown and Brett Rader. Each episode will cover sports news and history, but in a way that even people who don’t care about sports will still enjoy. Expect lots of jokes. Bi-weekly episodes available via iTunes. For weekly episodes, subscribe to our Patreon! Intro song via Free Music Archive – https://bit.ly/2uwGVut

The Death Of An Offensive Lineman
August 15, 2018
Adam, Brett, and new co-host Adam Ganser talk about a tragedy at the University of Maryland, a scandal at Ohio State University, a questionable firing, and so much more! A Patreon Exclusive!

NFL Training Camp Is Boring
August 8, 2018
Adam and Brett discuss the most interesting stories emanating from NFL training camps this season. Most of them don’t involve actual football, because NFL training camp/preseason action is trash. Also stay tuned for an important horse sports update at the end!

Don’t Be A Hader
August 1, 2018
Adam and Brett explore some of the most interesting stories from the world of sports this week. Includes stories about a racist relief pitcher, a garbage NFL team owner and his garbage political stance, a couple of important baseball trades, and so much more. A Patreon Exclusive!

The Curse of the Billy Goat (and Other Less Important Sports Curses)
July 25, 2018
Adam and Brett look into some of the most enduring curses in sports history. Also Adam casts a curse of his own on the Los Angeles Dodgers. The Tecate Curse is real!

A Crazy Week For Football
July 18, 2018
Adam and Brett discuss the World Cup, the NBA Summer League, the MLB Home Run Derby, and a possible home invasion in Buffalo. A Patreon Exclusive!

LeBron James and the Decisions
July 11, 2018
It’s the inaugural episode of our new sports podcast! This week, Adam and Brett discuss LeBron James coming to Los Angeles and the chaos that’s surrounded his free agency decisions in the past. Listen now!