Conspiracy! The Show – “The Skull and Bones Society”

One of conspiracy theorists’ favorite target groups, right up there with the Masons and the Illuminati, is Yale University’s secretive and prestigious senior society Skull and Bones. Although, some even claim they are the Illuminati. That’s just one of the ideas about them that we get into in this week’s episode:

The Skull and Bones Society

Skull and Bones is the oldest existing senior society, founded in 1832. They’re famous for their secrecy and exclusivity. However, their creepy practices like laying in coffins and decorating their 1850s tomb-palace with skulls and skeletons, are widely known. The shockingly long list of powerful people who’ve been counted as members throughout history are no secret either. Famous “Bonesmen” include several presidents and high-level members of U.S. government (like George W. Bush, George H. W. Bush, John Kerry, and William Taft), powerful businessmen (like Carnegies, Rockefellers, and Fords), and other prominent members of society including authors, athletes, and religious leaders. 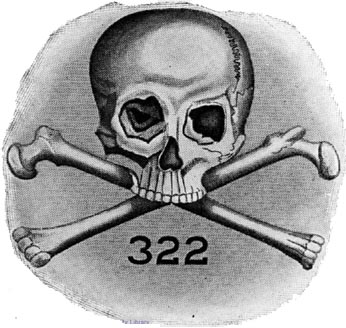 Rumors about Skull and Bones range from the absurd to the…more absurd. Detractors accuse them of everything from digging up Geronimo’s bones to killing JFK! Skull and Bones is a regular target for conspiracy theories largely for one reason: their secret (and creepy) rituals. A 1986 exposé written by historian Antony Sutton is the catalyst for most modern conspiracy theories. That book, America’s Secret Establishment, argued that old-line families in the society were trying to transform America into a Bonesmen-run dystopia.

Do you want to hear Conspiracy! The Show every single damn week? You’ll be able to do that soon, and all you have to do is subscribe to Unpops on Patreon. In the meantime, subscribe to free bi-weekly episode on iTunes. You can also check out video version of this and a bunch of our other shows on our YouTube page. Oh, and maybe consider throwing us a follow on Instagram, Twitter, and Facebook.