We decided to check back in with the dictator of the Philippines, Rodrigo Duterte, and WOW has this guy had quite a month. Listen to the episode to hear Adam and Quincy discuss the madness!

Literally, addressing a group of former communist rebels: “Tell the soldiers. There’s a new order coming from the mayor. We won’t kill you. We will just shoot your vagina. If there is no vagina, it would be useless.”

What did his official spokesman, Harry Roque, say? “I mean, that’s funny. Come on. Just laugh.”

He says China put them there to oppose the United States, not the Philippines, so people shouldn’t worry. Never mind that despite the fact that he’s trying to change the relationship (up to and including suggesting that “if you want, you can make us a province, like Fujian. Province of the Philippines, Republic of China”), the Philippines and China don’t exactly have the best history.

…and of COURSE this was directed at women! This clown literally got up there and pretended to try to eat a wrapped candy bar, and then was like, see? “Here, try eating it without unwrapping it. Eat it. That’s what a condom is like.” Not joking.

Cause you know how after sex the woman eats your dick and you have to wait for it to grow back? Condoms encourage that I think.

The latest numbers come from an opposition report called “Fighting Illegal Drugs: #RealNumbers” (and yes, there is actually a hashtag in the title), which is really more of a cheap infographic than a “report.” 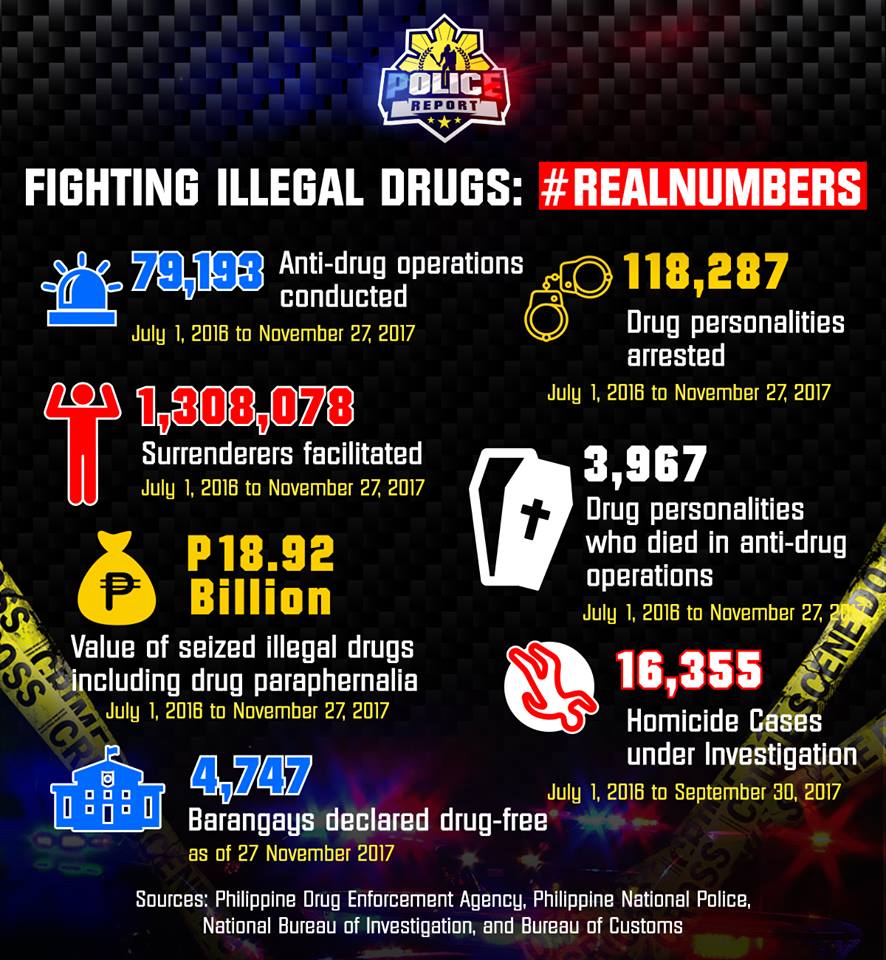 So it looks like he won’t reach that “100,000 criminals dumped in Manila Bay the first six months of my presidency” goal. What a lazy fuck.

But depending on who comes next it could be an out of the frying pan, into the fire kind of sitch, plus there’s something fishy about the whole thing anyway…the context is this: basically, Rod wants to change the constitution so the Philippines government runs on more of a federalism system, like in the United States. Of course, whenever a dictator starts talking about changing the constitution, people worry that it’s a power grab. In this case, the opposition is worried he’ll work the new system in a way that allows him to stay in power beyond the single term of six years that the Philippines constitution allows for now. Here’s what he had to say about that: “I will step down by 2020, I will not wait for 2022. I am old. I have no more ambition. I really would like to rest” (which is not unlike how Putin talks, just throwing that out there).

March 7th – The Hague Has No Jurisdiction Over Me!

We mentioned on an earlier episode that the ICC was looking into Duterte’s human rights violations. We also mentioned that dictators have this tendency to pull out from the ICC when they commit, y’know, human rights crimes. Duterte, March 7: “You cannot acquire jurisdiction over me, not in a million years. That is why I don’t respond to them. That is the truth. Believe it. They cannot ever, ever hope to acquire jurisdiction over my person.”

The Philippine government angered the UN after one of its human rights investigators was included on a list of 600 people declared to be communist terrorists, specifically, he was referring to UN special rapporteur on the rights of indigenous peoples, Victoria Tauli-Corpuz, who he claimed was a senior member of a Maoist rebel group.

In response, the UN high commissioner for human rights, Zeid Ra’ad Al Hussein commented: “He needs to submit himself to some sort of psychiatric examination. This kind of comment is unacceptable. These attacks cannot go unanswered, the UN human rights council must take a position.”

…and Duterte’s response? To suggest that UN investigators be fed to crocodiles, of course! “If these fools come here, are there crocodiles here? The ones that eat people? Throw those sons of bitches to them.”

March 15th – “Clean Up Your Resort Island Or We’ll Do It With Dynamite!”

Apparently, the island of Boracay in the Philippines is a nightmare area filled with raw sewage and unstable infrastructure? So here’s what official spokesman Harry Roque had to say: “The last that I heard is that the local government may even ask the President for assistance to call in the Marines if need be. So when I heard that report, I told them, send the letter because I’m sure the President will not hesitate to send in the Marines and even use dynamite to blow up that illegal structure there.”

Seems a little extreme, but okay.

So I guess the opposition is taking that “Duterte wants to be president forever” thing pretty seriously, because they’re trying to pass a bill that would prevent “political dynasties” from happening. Harry Roque again: “The President has said that the voice of the people is the voice of God. So if they want to send a relative of an incumbent official to public office so be it. That’s the presidential position.”

Only Rod could argue that a bill meant to avoid nepotism in the office of president is actually anti-democracy.

So apparently there’s a “fake” Duterte who calls himself “President Lodi” who sometimes conducts interviews over the phone pretending to be Duterte. Or we suppose it’s possible it’s a “John Miller” kind of situation where it’s actually Duterte? But probably not, I mean the guy actually introduces himself as “President Lodi” when he calls in, so we’re not sure how people are being fooled by this.