There’s a new episode of Pretty Scary up now on the subscription site. We highly encourage you to check it out. To get you all excited for it and whatnot, here’s an outtake from the show.

In this clip, co-host Caitlin Cutt shares a recording with the power to turn even the darkest of days right around.

You wouldn’t know it from that clip, but this week’s episode is all about the Mothman. If you’re unfamiliar, the Mothman is a mythical creature that allegedly terrorized resident of Point Pleasant, West Virginia, between from 1966 to 1967. There’s a Richard Gere movie about it and everything.

Some locals blame a bridge collapse that killed dozens of people on the mysterious Mothman sightings, yet they aren’t so broken up by this atrocity that they can’t also find time to throw a festival in his honor every year. They even built a statue! 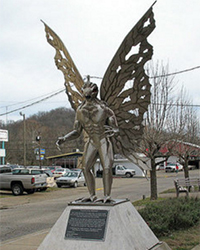 “Does this angle make my head look unremarkable?”

If you want to hear the entire episode, head over to our subscription site at connectpal.com/unpopularopinion and get yourself signed up. For just $4.99 a month, you get 8 – 10 episodes of pure comedy gold every single week. Check out our “Shows” page to see what we have to offer. You’ll even find links to where you can subscribe to free episodes. That page has everything!