5 Nirvana Records That Will Change Your Life (Financially)

Hey! Did you know that in addition to writing columns, I also host a bunch of podcasts? It’s true! In fact, I just launched a new one with my comedian friend Travis Clark. It’s called Heart Shaped Pod: A Nirvana Podcast and, as the name implies, it’s all about the band Nirvana. Why a Nirvana podcast? Because they’re my favorite band is why. Well, that and a bunch of other reasons. You can hear us talk about all of them on the first episode right here.

Then after that maybe you’d consider subscribing on iTunes and checking out the rest? There’s already a second episode there waiting for you!

As for this column, I’m also talking about Nirvana. Specifically, Nirvana albums that will change your life. Not “change your life” in the “Natalie Portman way overselling The Shins to Zach Braff in the movie Garden State” kind of way. No, I mean they’ll change your life in a financial way if you’re ever lucky enough to stumble upon a copy somewhere for cheap and have the presence of mind to buy it and flip it on eBay or some shit. For example…

This, for all intents and purposes, is the holy grail of Nirvana rarities. Originally released in 1988, “Love Buzz” was Nirvana’s first single. It was available exclusively through “Sub Pop Singles Club” mail-order service. Only 1,000 numbered copies were pressed. Another 200 were pressed with the number section crossed out in red marker. 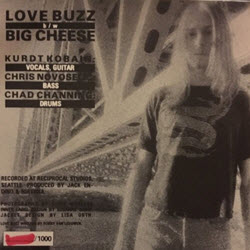 Available on eBay for less than the price of a gently used, newer model car!

If you happen to find one in a used record bin somewhere (you probably won’t), get ready to live lavish! Whether your copy is numbered or not, if it’s in good condition, it’s worth thousands of dollars. The copy in the image above is currently listed for just under $6,000. The least expensive option is $2,400, and that’s only if no one outbids you in the next six days.

I probably don’t have to explain why this particular item is so valuable, but let me kill some word count doing that anyway. It’s the band’s first single and not a lot of them were printed. There’s not a lot of interesting details to it. The real selling point is the price at which one could sell it.

That said, not every exorbitantly priced Nirvana rarity has such an innocuous backstory…

The song “Pennyroyal Tea’ was scheduled to be released in April, 1994 as the third single from Nirvana’s final album, In Utero. Unfortunately, that’s also the same month Kurt Cobain died.

Why is that unfortunate? Well, for starters, because Kurt Cobain died, you insensitive jerk. Beyond that, there’s also the issue of what was on the B-side of the “Pennyroyal Tea” single. It’s an obscure song that first appeared on The Beavis and Butthead Experience album. It’s called “I Hate Myself And Want To Die”.

Obviously, releasing a song with that kind of title mere days after the person who wrote it committed suicide (maybe) is an unspeakably bad look. With that in mind, Geffen Records canceled the release. However, they didn’t cancel it before the discs were shipped to stores. A few enterprising record store employees were smart enough to snatch a few before they got shipped back.

If you can find one of those copies now, you have fallen into a small fortune. There are copies selling on eBay right now for as much as $1,299. In fact, this release is so rare that counterfeit versions of it eventually flooded the market. There are a lot of things you can check to make sure you’re looking at a legitimate copy, but the most obvious tip-off is that the fake versions spell the word “hiring” as “hirinng” on the rim of the disc.

For what it’s worth, if you think the fact that Nirvana released a song called “I Hate Myself and Want To Die” is morbid, rest easy knowing that was almost the title of their entire final album.

Also, if you’re interested in a less hard to find and therefore less expensive version of this particular rarity, it was re-released in 2014 for Record Store Day as a vinyl 7-inch. Copies of that are aplenty on eBay and cost significantly less money.

The Hormoaning EP was a favorite among Nirvana fans when it was released, mostly because it features some of the band’s most beloved B-sides (“D-7” for the win). Since it was only available as an import released to promote their first Australian tour, original copies of it are extremely hard to find.

As I write this, a first pressing copy of Hormoaning is selling online for $2,999. 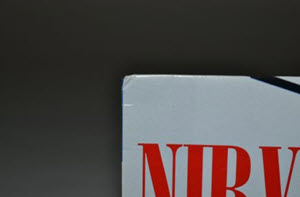 Complete with damaged corners and everything!

Hell, even the version that was re-released in 2011 for Record Store Day sells for decent cash if you can get your hands on one. For maximum investment potential, though, try to find the original Australian version.

Alright, enough with Nirvana records only the One Percent can afford. Let’s shop for something a little more reasonably priced.

The Red Marble Version of Bleach

Just joking! This is still expensive as shit! The copy pictured above is priced at $2,500 on eBay currently. That’s a hefty price price tag for sure, but there’s good reason for it.

For one thing, the very first version of Bleach was limited to a pressing of only 1,000 copies. Those copies were only available at a Seattle music festival called Lamefest. Most people had never heard of Nirvana by that point. Pressing up lots of copies of their album would have been the height of fiscal irresponsibility.

However, once the band started to gain a following, Sub Pop decided to put Bleach into slightly heavier circulation, pressing up several different colored vinyl, limited edition versions. Among those releases, the “red marble” or “red splatter” version is the most sought after. 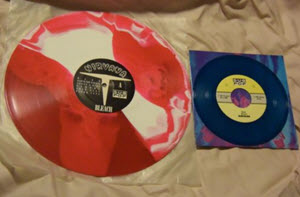 Get your copy now! You can always pay rent next month!

It’s limited to 500 numbered copies, so getting your hands on one will be difficult for a lot of reasons. Some of them don’t even involve your shitty credit/inability to secure a loan.

So, that’s a bummer. However, if you’re looking to own a slightly less expensive piece of Nirvana history, you can always try to track down…

Literally Any Other First Pressing Of A Nirvana Album

Here’s the thing with classic albums — if you can get your hands on a first pressing of that album, no matter what album it may be, it’s probably worth at least a little money. I once bought a first pressing of Sade’s debut album at a used record store for $2.00. I immediately sold it on eBay for $50 to a guy in the Philippines who I’m assuming is a Rodrigo Duterte supporter. Capitalism, man.

Anyway, when it comes to Nirvana albums, first pressings are highly sought after among collectors. Take the aforementioned Bleach, for example. Even if you can’t track down the red marble version, fear not. The subsequent Sub Pop vinyl pressings also bring in decent cash, especially if it mentions “Erika Records” anywhere on the cover. 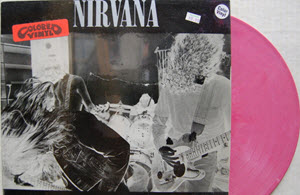 The same goes for all of their other albums. Stumbling upon a first pressing can mean a nice profit (or huge savings) if you know what you’re looking for (and if the record store in question doesn’t).

For the Nevermind album, check for the word “Masterdisk” etched into the run-out groove of the vinyl. 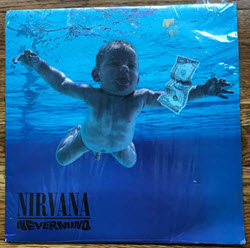 If In Utero is more your speed, and it should be because it’s the goddamn best, look for the original, translucent vinyl limited edition. 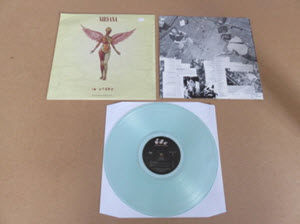 The list goes on and on. Well, not really, but you get the idea. What I’m getting at is that if you keep your eyes open and study up on the little quirks and details that differentiate a run-of-the-mill copy of an album from one that’s worth a little more, you’ll make any record shopping trip all the more enjoyable, regardless of what band you’re into. Now get out there and start flipping records for profit online, you entrepreneurial son of a bitch!

Subscribe to Heart Shaped Pod on iTunes. It’s free! And then maybe consider spending a little money by subscribing to the rest of the Unpops Network shows  for just $5.00 per month on Patreon.