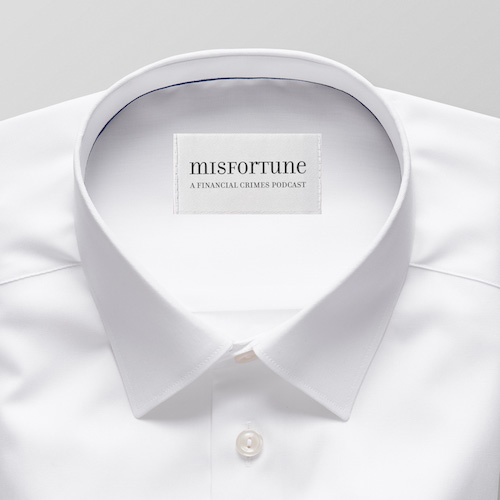 Misfortune is a bi-weekly podcast hosted by Adam Tod Brown and Danger Van Gorder that explores the sordid world of white collar crime. Click here to subscribe on iTunes.

The Texas Commerce Bank Robbery
May 16, 2018
On this episode, Adam and Danger discuss the largest bank robbery in San Antonio history, and how the people behind it almost got away. Listen now!

Eddie Tipton’s Hot Lotto
May 2, 2018
Adam and Danger discuss the crazy case of Eddie Tipton, a man who rigged the lottery in his favor and almost got away with it. Listen now!

Belle Gibson Is Fine
March 21, 2018
Adam and Danger discuss the bizarre case of Belle Gibson, an Instragram model who made a killing by pretending to have cancer. Includes an interview with Beau Donelly, the journalist who broke the story. Listen now!

Nick Leeson Destroys A Dynasty
February 21, 2018
Adam and Danger discuss the insane case of Nick Leeson, a lowly futures trader who brought down one of the banking industry’s biggest and oldest dynasties. Listen now!

Rita Crundwell Has Horse Money
February 7, 2018
Adam and Danger talk to forensic accountant/filmmaker Kelly Richmond Pope about the insane case of Rita Crundwell, who stole more than $50 million from the tiny town of Dixon, Illinois in her role as comptroller, then funneled that cash into the biggest show horse career money could buy. Listen now!

The Lou Pearlman Story
January 10, 2018
On the inaugural episode, we welcome Vanity Fair writer Bryan Burrough to discuss the insane and tragic story behind boy band impresario Lou Pearlman. You know all about his crimes against music, but are you familiar with Lou’s actual crimes? Get ready for a tale of greed, deception, blimps, fake airplanes, Art Garfunkel, and so much more.