The Least Anticipated Podcast of the Week – Ep. 23 – “The Garlic Dipping Sauce Show”

Wake up! It’s time for a new episode of The Least Anticipated Podcast Of the Week! We’re going the extra mile for you this time around by posting all of the videos and trailers we watch during the show right here on this website. Just below the podcast, in fact. The podcast is below this text. You’re welcome for the directions, put your GPS away.

We’ve included Adam’s notes for the recording along with each of the videos. Read along as you listen along! It will be very distracting!

I still have little to no idea what this franchise is even about. Chet, I know you’ve seen it or at least read the books. Please give me some insight on the podcast. Thanks!

I’ve only heard good things about the first Lego movie, but I’ve never seen it. I don’t know that incorporating Batman into it will help unless maybe they finally lift his long standing rule about not killing people.

I’m not going to let up on this, Chet. You really need to see John Wick. Part two is coming out soon and then it will be too late. 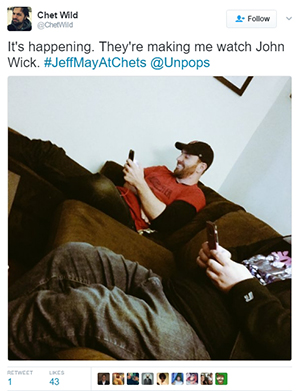 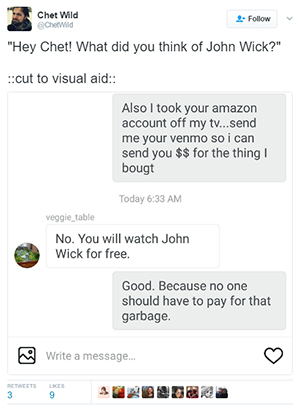 This guy has always struck me as being intensely unlikable. Like if you were a fan and met him you’d be wildly disappointed. He makes good albums though!

I’m into it! Like Duran Duran if there were women in the group, which I don’t believe there were. I could be wrong.

There’s no trailer for this as of right now, but it actually looks like it might be pretty great. It’s co-produced by Scott Aukerman of Comedy Bang Bang and Akiva Schaffer from Lonely Island. Sarah Silverman is in it. I’m down!

Have you ever watched this show? I’ve watched this show. It’s a great show. I met these guys back when the show first premiered. They’re from Staten Island so we mostly talked about the Wu-Tang. It was great. I’m glad this show is still on the air. They deserve it.

So this fucking show is coming back. I really do hate it so much. Do you hate it? I hope you hate it too. I get it. You’re people who have conversations. Also there are zombies around. How goddamn inept is the version of the planet this is happening in that they can’t put down a zombie outbreak? You have guns and winter, that’s all you need. It makes no fucking sense that things have spun this far out of control. Or as out of control as they’d spun by season four, which is when I stopped watching this garbage.