Did Kurt Cobain Really Live Under A Bridge?

As a teen, Kurt Cobain was homeless and, for a brief time, lived underneath a bridge. Even worse, that bridge was just two blocks from his own mother’s house. Most Nirvana fans have heard that story before, but is it true? The short answer is “no.” However, the actual truth about Kurt’s living situation during this time is just as interesting as that famous bridge story. You could even argue that it’s far more interesting. The best thing to do, though, would be to listen to hosts Adam Tod Brown and Travis Clark talk about it on this week’s episode of Heart Shaped Pod.

That’s not the only thing we talk about, obviously. Spending an hour on that one point alone would be insane.

However, it does make for some interesting questions about how Kurt Cobain’s proclivity for myth making would have impacted his legend had he lived to see the internet age. Sure, lying about sleeping under a bridge isn’t on par with Steve Rannazzisi claiming he was in the Twin Towers on 9/11, but it’s also not nothing. That’s especially true when you take into account that this wasn’t the only tall tale Kurt Cobain spun about himself during his time in the spotlight. 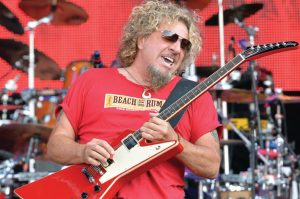 We know what your first concert was, Kurt.

So, you can hear us talk about that on this episode. We also discuss the first time Kurt met eventual Nirvana bassist Krist Novoselic and the band’s first ever live show. Get ready for lots of urine talk when we embark on that last thing. It was a wild show.

Subscribe to Heart Shaped Pod on iTunes to hear a new episode every week, absolutely free. We can’t give the entire store away, though. To hear all of our podcasts, completely ad-free, subscribe on Patreon. For just $5 a month you get twelve full episodes each week. We’ve got true crime shows, international news shows, conspiracy theory shows … the list goes on and on. Even if you only listen to half of what we put out each week, $5 per month is still a great deal. Sign up now!