What in the World – Gay Concentration Camps in Chechnya

Today’s episode of What in the World focuses on the gay concentration camps in Chechnya.  You can find the full episode for free here:

As of the April 21, 2017 New York Times article on the subject, at least 100 gay men from Chechnya and the North Caucuses had been rounded up, imprisoned and tortured, with at least three killed, under the leadership of Ramzan Kadyrov.  This has been corroborated by the human rights organization Human Rights Watch.

Who is Ramzan Kadyrov?

The leader of Chechnya since 2007, Kadyrov is a pro-Kremlin nasty-pants ruler.  Despite his strongly anti-LGBTQ and anti-woman policies, he is weirdly popular on—and I’m dead serious here—Instagram, boasting nearly three million followers. 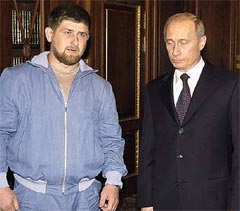 This picture of him in a “dress” track suit with pleated pants pretty much sums him up.

His instagram is full of photos of him snuggling with cute animals including his cat, videos and pictures of him working out and doing karate, and photos highlighting his love and respect for Putin.  It’s weird, and no one can convince me otherwise.

He came to power after his father—the Putin-appointed head of the administration since 2000—was assassinated by  Chechen Islamists.  That same day, Putin invited Kadyrov, then his father’s security chief, to Moscow.  Putin began grooming him for political office even though he had been accused of several kidnappings.

Kadyrov is a deeply corrupt leader, who lives extravagantly and funds his personal military of loyalists (the “Kadyrovtsy”) on the money Chechnya receives from Russia.  He also promotes a strict interpretation of Islam, including forcing women to wear headdresses and encouraging honor killings as part of his “virtue campaign.”  He has encouraged men to go out and shoot paintballs at women who are not properly covered.  We’re not going to link to it, but video can be found on YouTube.

He has gotten in trouble with Moscow for some of his actions and Twitter posts, such as videos of MMA fights between 10 year-old boys, including his own sons. Russia’s sports ministry launched an investigation and the finance minister proposed cuts to the Russian budget. Now with news of the targeted persecution of gays and international pressure there is speculation that Kadyrov may be punished, although it is unlikely he will be replaced as he has been able to keep the region stable and keep Islamist insurgency under control.

The targeting of gay men in Chechnya started in chat rooms.  Security agents would pose as gay men, including old friends of the targets, and lure them to secondary locations where they were interrogated and tortured to try to get them to disclose the names of other gay men.

Some of them men were returned to their families or their families were brought to them at the camps, with the expectation they would perform an “honor killing.”  One man’s family was told, “sort it out or we’ll do it ourselves” after their son had spent two weeks under torture in the camps.

The arrests allegedly started after gay rights group GayRussia.ru applied for permits in Chechnya for gay pride parades, which were denied. The group filed the permits anyway, hoping to take the fight to the European Court of Human Rights.

Kadyrov denies this has happened, saying “you cannot detain and persecute people who simply do not exist in the republic…if there were such people in Chechnya, the law-enforcement organs wouldn’t need to have anything to do with them because their relatives would send them somewhere from which there is no returning.”

Putin backs these denials, and in St. Petersburg 10 gay rights activists were arrested during a May Day demonstration.

Conditions in the Camps

The men were being held anywhere from a day to several weeks, according to Human Rights Watch and interviews with gay men who escaped Chechnya.  There were reports that as many as 30 men were held in a single cell in the main camp, and some of the camps were nothing more than sheds outside police stations.

They were starved, tortured with electricity, and beaten several times a day with polypropylene tubes.  Said one survivor, “For 20-30 seconds they spin the handle, you feel the electricity, then you fall down, they stop it, and then immediately you come back to consciousness and you are ready again for a new discharge.  And it goes on five, six, seven times.”  The men were beaten and tortured to try to get them to give up the names of other gay men.

Of the reported deaths, one of them was as a result of the torture he endured.

What is the Current Situation?

The latest report is that due to international pressure, Chechnya has relocated the main camp and the families of missing men are being encouraged to cover up their disappearance with statements that they’ve left the republic to work in Moscow.

To make matters worse, the men who have escaped are unable to qualify as refugees to obtain visas to the United States because Chechnya is technically considered part of Russia, and a refugee must have already fled their country of origin.  So men who have fled to Russia are not considered refugees, and there is no visa for humanitarian relief.  There is a similar roadblock to the E.U.

U.S. diplomats recommended the men leave Russia, and try applying as refugees from there, but they are worried this would both jeopardize their ability to make it to a safe country should this application be denied, and that it would put them at risk of being returned to Russia on trumped-up charges.

Part of the reason the U.S. and the E.U. are hesitant to accept Chechens is because many of the foreign fighters who have joined ISIS have come from Chechnya.  It doesn’t help that they are Muslim and gay—not exactly the west’s favorite things for an immigrant to be—and that the current President has, shall we say, a bizarre fondness for Putin.

To hear What in the World and all of our other shows every week, completely ad-free, subscribe on Patreon.