What Will Trump Do Next?

Hey! You know what I haven’t done in a long time? Write a column. Get off my back, I’ve been busy building a podcast network. I’m not made of free time. Anyway, I said I’d get back to it at some point and, well, here we are. You’re welcome.

The last time we talked, I was right on the verge of being way more correct than most about Trump’s chances of winning the election. So, it feels right to start things back up by talking about Trump again. He’s our president now, whether we like it or not. 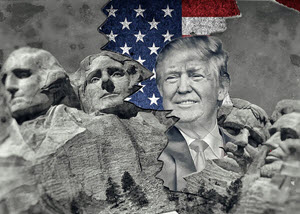 And just as a lot of people expected, he’s goddamn terrible at the job.

Except it hasn’t been run-of-the-mill government bad. Every administration is bad in some way, that’s just how the world works. With Trump it feels different. It feels bad more in the “meteors and space debris penetrating the atmosphere and wantonly destroying buildings and killing people weeks in advance of the far more catastrophic neutron star that eventually consumes us all” kind of way.

With that in mind, you can surely understand why this week’s episode of the Unpopular Opinion podcast is all about what Donald Trump might do next. You can listen to it right here.

Also, you can read up on the subject right damn now. You’ll probably finish the article way before the podcast is done. Which is cool, because then by the time you get to the end you’ll feel all superior and shit because you already know what we’re talking about.

This is my favorite choice by a wide margin. Not my favorite in that I’m pining for the day when we can start dropping bombs on some still unnamed foreign nation. That will be bad times, no matter where it happens. I’m just saying it’s the easiest and likeliest option. Presidents start wars all the damn time, for all sorts of reasons. War is a fantastic distraction, and Trump has the added benefit of commanding over a base that, barring the alt-right isolationist types he already alienated by bombing Syria, would view a Trump-led military intervention as the human embodiment of their wildest Toby-Keith-patriot dreams.

Also, he’s got a lot of options on the table. A conflict that somehow involves Russia as the adversary would go a long way toward countering all that “Trump is a Russian spy” talk. And maybe create an immediate need for jobs. Massive global conflicts requiring the production of mass amounts of weapons and supplies are a boon to any economy, and that’s what a war with Russia would most likely be. 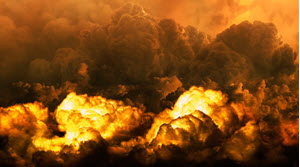 I searched “Russia Army” on a stock photo site and this was the second result.

We can’t forget North Korea, obviously, and that’s mostly because they won’t let us, what with all the repeatedly firing missiles into the ocean and such. Sure, most of those missiles have zero chance of reaching US soil. But they can sure as shit reach our allies in the region! That could very well be all the provocation Trump would need to justify launching military action of some sort.

With all that said, my long shot choice for Trump’s First War™ …

… is Venezuela. We’ve been, for all intents and purposes, waging economic war with Venezuela ever since Obama declared them an enemy of the United States via Executive Order back in 2015. Weird how that’s one EO Trump made no mention of wanting to overturn upon taking office. I’m sure absolutely none of it has anything to do with the fact that we discovered in 2014 that Venezuela owns the rights to the largest oil reserves in the entire world.

Speaking of oil, Venezuela nationalized theirs in 2007. Which resulted in a massive lawsuit over how much Exxon should be reimbursed. They wanted $6 billion. They lost and got $1 billion instead. Rex Tillerson was the CEO of Exxon at the time. He’s held a grudge ever since. He’s our Secretary of State now.

Please understand, this one isn’t me talking. No, it’s far worse. This theory comes from Yale University professor and US historian Timothy Snyder. During an interview with Salon.com, the professor was asked about the possibility of Trump “pulling a Hitler” (my words, not theirs) and attempting to take total control of the government by declaring a state of emergency. Here’s what he said:

“I think it’s pretty much inevitable that they will try. The reason? I think that is that the conventional ways of being popular are not working out for them. The conventional way to be popular or to be legitimate in this country is to have some policies, to grow your popularity ratings and to win some elections. I don’t think 2018 is looking very good for the Republicans along those conventional lines. This means they could be seduced by the notion of getting into a new rhythm of politics, one that does not depend upon popular policies and electoral cycles.”

So that’s problematic I reckon. However, there is a bright side. Snyder also believes our democracy is still strong enough that any attempts to overthrow it will fail. Here’s another quote:

“My gut feeling is that Trump and his administration will try and that it won’t work. Not so much because we are so great but because we have a little bit of time to prepare. I also think that there are enough people and enough agencies of the government who have also thought about this, and would not necessarily go along.”

You hear that, America? There are several people and agencies throughout the government right now who worry about the possibility of our president attempting to overthrow our electoral process. What a time to be alive!

Fine, so wars and coups are too gloom and doom based for you and your “things can’t possibly get any worse” ideals. That’s understandable. Keep hope alive and whatnot.

If any of that sounds like you, rest easy knowing you’re not alone.  There are politically minded types out there who do see a relatively cheap and easy way out of the Trump debacle. Specifically, The Hill columnist Brent Budowsky sees the recent appointment of former FBI Director Robert Mueller as special counsel on the Russian election scandal as the first step toward Trump inevitably resigning.

That sure sounds nice! And the parallels Budowsky draws between Trump’s alleged dealings with Russia and Watergate do make it seem like we’re headed down a similar road. 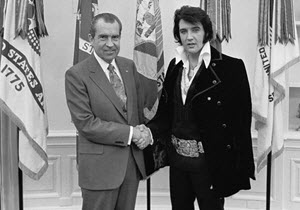 Meaning Trump’s gonna meet Elvis? Or am I mixing up my Nixon movies?

He points out that Trump has fired everyone else who’s tried to stick their nose in the Russia business, but that firing Mueller would be a fast track to impeachment.

So … that means he can technically still fire him though, right? I guess that’s when we’d know if the coup switch is getting flipped next. But let’s say it did lead to impeachment proceedings. What then?

Here’s a quote from this politico.com article about American University professor Allan Lichtman:

“Allan Lichtman, a professor at American University, reached meme-status last fall for predicting long before anyone else that Trump would win, using a formula based on the popularity of the party in control of the White House that accurately predicted the eight previous presidential elections.”

Man, sometimes I feel like no one took the political writing I did at that comedy list article website seriously. Because I predicted that shit too, way way back in the day. It’s fine, though. It’s fine. I guess this just means we should hear Allan and his new book out, right? 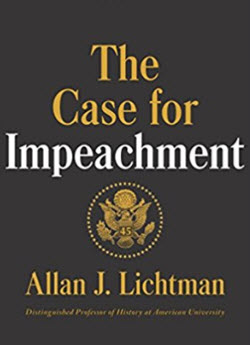 I wouldn’t be at all surprised if this was a Mad Libs book.

He was sure Trump would win, and he’s just as sure he’ll be impeached. While the Republicans still control the House and Senate, no less!

I can’t tell you why he’s so confident about that because I haven’t read the book, but he’s been right before. I know professor John Oliver said Trump getting impeached will probably never happen, but he said the same thing about Trump getting elected. Place your bets accordingly.

Here’s the thing about Trump. He feeds on your low expectations. So with zero hesitation, let me be an early adopter of the “Trump could get re-elected” platform. For one thing, this is all much bigger than just Trump. The Trump administration is still an administration. There are a lot of moving parts making a lot of decisions and writing a lot of policies. All of that lives on even if the monster eventually loses its head. We’re stuck with that for another four years no matter what.

What worries me about the prospect of Trump getting somehow removed from office is that it will breed complacency. The same kind that got him elected in the first place. No one took the threat seriously the first time around. The polls reflected that, even if he lost the popular vote. Having Trump gone could inspire a “mission accomplished” kind of mindset. If voters on the left get lazy all over again, we’re back to politics as usual. 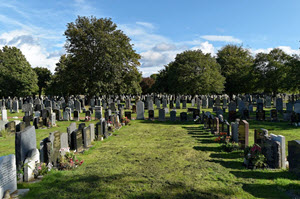 Except with way more people dead from a lack of affordable health care.

That’s exactly what we don’t want. The problems Trump brought to the the presidency will still be there when he leaves. It’s not like Mike Pence is going to do an immediate about face on immigration and basic human rights. Things will be exactly as they are now, except with a more experienced politician in control.

Sure, kicking Trump out of office sounds great. I’m sure it would come with some degree of catharsis that a lot of people need right now. But still, it shouldn’t be the ultimate goal. What really matters is keeping this administration from doing all of the terrible things they want to do. Also, and making sure they don’t win again in 2020.

I know it sounds crazy, but please, worry about it anyway.

Adam would like it very much if you were to check out the Unpops Podcast Network on iTunes, Soundcloud and YouTube. If you’re way ahead of the curve on that, maybe consider subscribing to the entire line-up of shows over on Patreon. You get ten episodes a week for just $5 per month. It’s crazy cheap and all of the podcasts are the damn best. Oh, and after you do all that, follow Adam on Twitter.