Good news! There’s a new episode of What In the World, the international news and politics podcast I co-host with the inimitable Quincy Johnson, up now on the Unpops subscription site. You can hear it, and every episode of every one of our other shows, completely ad-free, for just $4.99 per month. Head over to our Connectpal page to sign up. On the off chance you’re the “try before you buy” type, you can check out the first 15 minutes of this week’s episode here:

If you’re curious what else we talk about this week, your decision to keep scrolling after the clip was a wise one, because I wrote a few words about each segment. Here goes!

Apparently, this is some sort of epidemic in Argentina right now. By that I mean it’s happened twice, but still, that’s enough instances of dolphins being dragged out of the ocean so tourists can take selfies to qualify as an epidemic if you ask me. The most recent case even includes video.

Is that tweet big enough for everyone to see? Jesus H. For the record, that dolphin was still alive when they encountered it in that shallow water. They could have redirected it back to the safety of its ocean home. Instead, they petted it and posed for pictures.

Somehow, this is still less awful than the other tourist/dolphin encounter in Argentina, which involved people passing a dolphin around at a resort until it finally died of asphyxiation. Leave the goddamn dolphins alone, you tourist idiots.

Also, Some Dude In Australia Put a T-Shirt On a Dolphin

More news from the world of humans terrorizing harmless sea mammals. This time, a man in Australia apparently decided to put a t-shirt on a dolphin. The story doesn’t actually specify that a man did it, but come on, we know this wasn’t a woman’s doing. 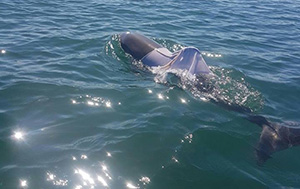 As funny as the thought of a t-shirt wearing dolphin may be, this is actually very dangerous. If at some point the shirt shifts and covers the dolphin’s blow hole it could kill the poor little guy (or girl). Unfortunately, no one has seen the dolphin since these pictures were taken. Researchers can’t tell if it was tagged previously or identify it from its dorsal fin since it’s covered by the shirt. Side note — Every dolphin’s dorsal fin is unique, like a fingerprint or a snowflake. Cute! Now someone get this goddamn t-shirt off this goddamn sea puppy.

The Zoo Animals that Survived ISIS

So here’s a mostly depressing story with kind of a happy ending! There’s a zoo in the city of Mosul in Iraq. Or at least there was before ISIS came to town. During the battle for control of the town, most of the animals died, with the exception of a lioness and a bear.

Locals kept the two alive by sharing their leftover food with them, but at one point leaving the house became too dangerous. They went more than a month without food. After ISIS was forced to retreat, an animal rights group swooped in to help, so that’s good news. Don’t look at the pictures unless you’re hoping to have your day ruined, though.

So this is pretty damn creepy. Some parts of France are overrun with wild hamsters, which is adorable. 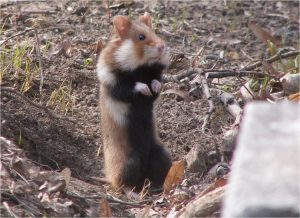 What’s less adorable is that in one particular area, those hamsters have taken to eating their own offspring. The problem, as it turns out, is corn. The areas in question used to be fields that included all sorts of weeds and other potential hamster food. Over time, they’ve become nothing but corn. When scientists started looking into why hamsters in this one area seemed to be dying off, the first thing they looked into was diet. They conducted an experiment that involved one group of hamsters eating a diet based on wheat and worms. Another group ate just corn. Horror story time! The corn-only group developed a nasty habit of storing their offspring along with their leftover corn and eating both when they got hungry. They ate their babies! While they were still alive! Fix this, France. Fix it now.

Hey! Do you subscribe to our podcasts on Connectpal? We have a bunch and they’re all great and won’t set you back much money at all. Just $4.99 per month! You should go here and sign up! Also, it would be rad if you followed us on Twitter, Facebook, Instagram and YouTube.