We’ve almost reached the end of 2016, and good damn riddance, you know? It’s been a garbage year for the most part, with all due respect to the Cubs winning the World Series and science declaring that goats probably make decent pets. 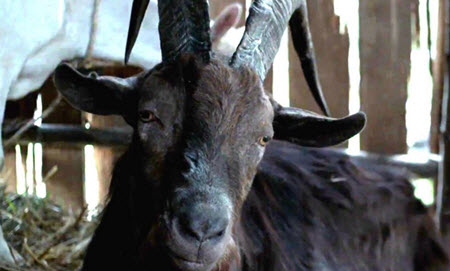 And an ideal choice when you want your movie’s version of Satan to be cute as a button!

Anyway, as internet law dictates, the passing of another year means it’s time for websites and podcasts far and wide to start cranking out lists of the best blah, blah, blah of 2016. We are no different. Better? Absolutely. But at least in this regard, no different.

Over at The Least Anticipated Podcast of the Week, one of the slew of fantastic shows available on our subscription site all for the low low price of just $4.99 per month (plug, plug, plug), me and Chet Wild have been counting down the best of everything of 2016.

Of course, what good is a list if you can’t stare at it angrily while fuming over all the things the idiots responsible for it failed to mention? To that end, I’ve compiled the various picks into a convenient word-based format. We’ll post them as each episode is released. Up first…

You’ll note that me and Chet took radically different approaches when it came to choosing our favorite albums of 2016 in that only one of us actually limited our picks to things that came out this year. Nevertheless, it made for an entertaining podcast episode. You can relive that magic right here if you’re so inclined:

But if reading is more your speed, here go those picks in a text way:

#10. HDBEENDOPE – P.Heace Be the Journey (Adam)/Gustav Holst – The Planets (Chet)

HDBEENDOPE is a rapper I first heard when we both were on the bill with Portugal. The Man at Bowery Ballroom in NYC. No big deal. During his set he mentioned that he had an album coming out the following Monday and that we should all check it out. I did that! And it was great! You can do it too! Right here!

You can also download it at hdbeendope.bandcamp.com. Do both!

As for Chet Wild, well, he went in a slightly different direction with his number ten pick. Gustav Holst was a classical composer who died in 1934. His most notable work is The Planets, and it’s Chet’s pick for the tenth best album of 2016…

…because this list is total anarchy and rules mean nothing anymore.

Oh, hey, maybe I overreacted in the previous entry. Looks like we’re back on track here. Two picks, both from the year 2016. We did it!

I picked Teens of Denial by Car Seat Headrest…

…because he is too.

Parquet Courts’ “Berlin Got Blurry” was my jam for weeks before I realized I sort of know the guy who plays bass in the band. Even without that neat detail the song was rad enough that I still would’ve checked out the album. I just probably would’ve listened to it on Spotify instead of buying a physical copy (which I subsequently left in my desk at Cracked) is all. Whatever the case, check it out I did, and it’s a treat. You should check it out too.

As for Chet’s number eight pick, he went with Guster’s Evermotion, an album that came out in 2015.

I accept that we’ve probably reached the least popular pick on my list. Mike Posner had a minor pop hit years ago with a song called “Cooler Than Me” and then promptly vanished. Not a lot of people noticed that last part. At least not until he resurfaced this year with a song called “I Took a Pill In Ibiza.” The remix version that everyone’s most familiar with is kind of stupid, but I’ll stand by the original version for the rest of my days.

That’s what compelled me to check out his most recent album, At Night, Alone. I enjoyed it thoroughly, maybe you will too. Or maybe you won’t. That’s fine. We don’t have to be the same person just because you listen to my podcast. Maybe you should just go listen to every Phil Collins song instead. I bring that up because that was Chet’s pick for the seventh best album of 2016 — Phil Collins’ entire catalog.

It was re-released in 2016 with reworked album covers featuring Phil’s appropriately aged face and everything. Buy it wherever fine Phil Collins reissues are sold!

We’ve officially reached the point where this list becomes a King of the Hill bit. For my number six pick, I went with Puberty 2 by Mitski. She writes great songs, she’s a machine on the guitar, and you should check out everything she’s ever done.

She only has two albums. You can handle that, lazy bones.

As for Chet, he went with the Chuck Mangione Quartet’s 1975 album Bellavia…

…and I somehow find this even more disrespectful of the “best albums of 2016” concept than the over-a-century-old classical number that kicked off this list. Depending on how many elevators you’ve been in, there’s a good chance you’ve already heard this album in bits and pieces.

If you listen to the podcast that goes along with this list, you’ll note that we hit an interesting moment when it comes time to discuss our number five picks. Namely, Chet Wild questions whether our pal Danger Van Gorder and his delightful band Countless Thousands deserve a spot on this list. Why? Because the album they released, You’re Goddamn Right, is actually just an EP.

Well, they do, because it was a wonderful EP that you should all listen to if you’re a fan of the rock. Like music, I mean. Not the former wrestler/future president. Also, you don’t get to pull the rules card when your number five pick…

…is a Fastball album that came out in 2004. #FastballAtChets

For my money, when it comes to rappers who will probably go to prison on trumped up terrorism charges someday, it gets no better than M.I.A. Her most recent album didn’t get as much attention as previous efforts, which is a shame, because it was a good one. One of my favorite albums of the year, in fact. That’s why it’s on the list, dummy. Also, the video for the first single (“Go Off”) made for a mesmerizing watch.

As for Chet, you’re not gonna believe this, but his number four pick went to a ’90s band called Fastball.

Specifically, their 2009 album Little White Lies. You know the one. #FastballAtChets

The Drive-By Truckers are one of my two or three favorite bands in the entire world. You know this if you listen to the podcast regularly. If you don’t, hey, why not get yourself some better taste in podcasts going forward? Anyway, the DBT’s 2016 album, American Band, was another in a long line of outstanding records from one of the most criminally underappreciated bands in rock.

Meanwhile, fresh off the triumph of having Ben Folds write a song about him at a concert earlier this year, Chet returned the favor by putting Ben’s 2015 album (so close)…

Listen, I know Beyonce’s Lemonade got all the press this year, and I’d never argue that she’s anything less than the most dominant pop artist working today. All that said, though, if you’re asking me (which you totally are if you’re reading this), I say the best pop album of 2016 was Rihanna’s Anti.

It’s far and away Rihanna’s best work to date. As far as pop records go, it’s adventurous as fuck. There aren’t a lot of songs that you’d immediately identify as singles, and even the ones that were released as singles still sound stranger than most of what you’re hearing from the radio these days.

…because #FastballAtChets is an unstoppable force that will consume us all before it runs its course.

I first heard the Coathangers near the end of 2015 when a random acquaintance posted this video on Facebook:

I’m not sure if it was the band name or what, but for some reason I found myself compelled to give it a listen. I was hooked immediately. As a result, I spent most of 2016 poring over their back catalog and impatiently awaiting the release of their most recent album, Nosebleed Weekend. Well, that second part only lasted four months, seeing as how the album came out in April. You get it.

Anyway, I cannot recommend this band highly enough. If you have a chance to see them in concert, do it. They’re incredibly talented, they write amazing songs … they’re just goddamn fantastic all around and discovering their music was absolutely one of the highlights of my 2016.

Chet stayed within the traditional constraints of the “best albums of the year” format with his number one pick, which went to former Barenaked Ladies front man and current solo sensation Steven Page.

I actually went back and listened to this album upon Chet’s recommendation and it is indeed a great one. Here’s hoping a living room concert at the Wild residence is in our future. #StevenPageAtChets